Despite the best efforts by bulls for what has been several weeks now, Bitcoin price can’t seem to get back above $60,000 and spend any meaningful time above it. Fundamentals are as bullish as it gets for the top cryptocurrency, but bearish technicals might have finally caused sellers to step in. 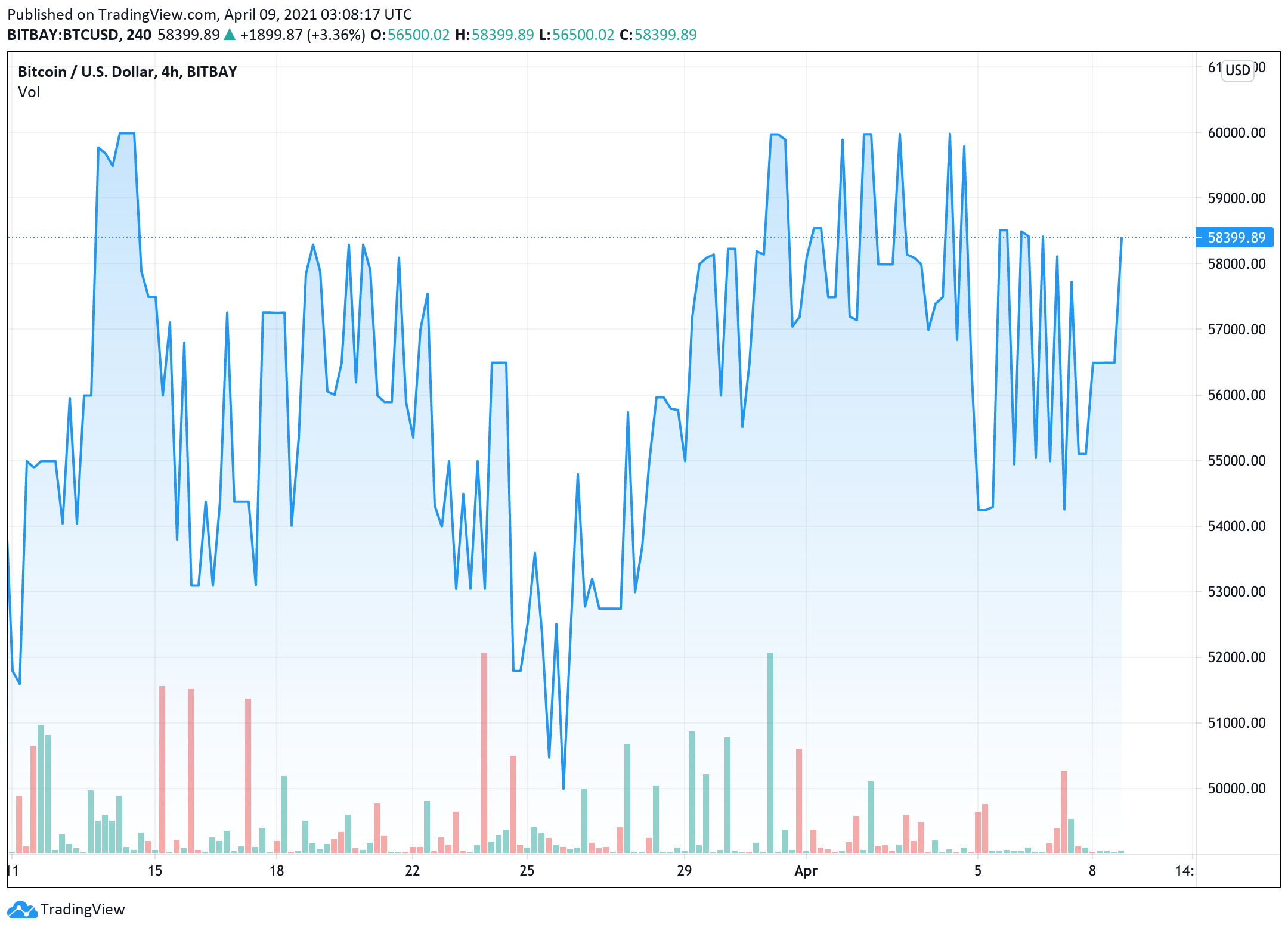 Bitcoin price has had its best year on record yet dollar for dollars and fundamentals, the stock-to-flow, and just about all other data suggests that the bull run isn’t near finished yet.

Technicals have been long overheated given the strength of the showing by bulls, leaving a large string of green monthly candles on the price chart without any serious corrective behavior. The once trending strong cryptocurrency has begun to slow, struggling specifically with anything around $60,000.

Indicators such as the logarithmic MACD are turning down on weekly timeframes for the first time since the bull phase began, and the quarterly candle just closed with the first-ever bearish divergence in history. Yet the top cryptocurrency hasn’t corrected anywhere near it has in the past.

At press time, Bitcoin unexpectedly turned around to increase more than $ 2,100, while the top cryptocurrencies also increased sharply, pushing the total market cap to $ 1,980 billion.

Bitcoin’s price has risen sharply since the beginning of the year, thanks to increasing interest in the cryptocurrency market by businesses and financial institutions. Many other large investment institutions also announced that they are considering investing and accepting the currency as a form of payment. Private bank Donner & Reuschel of Germany announced it will provide crypto buying and depository services to its customers.

JP Morgan Bank predicts that Bitcoin can reach a theoretical level in the long term of $ 146,000 when it starts to compete with gold.

According to Citibank analysts, the digital currency price could reach $ 318,000 by the end of this year. Strategist Mike McGlone suggests that Bitcoin could be traded for over $ 400,000 by 2022 if the market follows previous trends, which we have seen throughout 2013 and 2017.

The information has continued to give investors an optimistic view about the future of Bitcoin in particular and the crypto market in general.

Charles Younes, research manager at FE Investments, said: “We have been impressed by Baillie Gifford’s Global Stewardship fund, not only in terms of performance, but how they are factoring in ESG principles into their decision-making.

“Any company that generates more than 10% of its revenues from a proscribed list of industries is excluded, while positive screening is also used, ensuring only companies that make a positive contribution to society are eligible for inclusion.”

He added: “The team is well-balanced too, with six regional managers and three sustainability analysts contributing to stock selection. It is also competitively priced among its peers with an OCF of 0.53%.”

Commenting on the addition of the Comgest Growth Japan fund to the Approved List, Younes said its performance had also been “impressive”.

“Not only is the fund run by three FE fundinfo Alpha Managers, it has a good history of offering downside protection, while having in place a strong ESG process which analyses the risk of any potential investments.”

FE Investments has removed the Ninety One Enhanced Natural Resources fund and the Man GLG Strategic Bond fund from its Approved List, “for strategic and performance-related reasons”.

In March this year, Ninety One revealed to Investment Week it had merged the £53.3m Global Energy and £44.8m Enhanced Natural Resources funds into the Ninety One Global Environment fund in response to “a shift in investor appetite” which had caused AUM to decline.

“Although this fund has the same objective, the approach is very different and has a different management team, so the decision was taken to remove, rather than replace,” Younes said.

He added that while the long-term track record of the Man GLG fund had been good, recent performance had not been in line with expectations.

“The fund was caught on the wrong side of the market sell-off in 2020 after it removed all its hedging just before the Covid-19 pandemic hit markets. The manager then took a very defensive approach and so failed to benefit from the subsequent recovery,” Younes said.

“Since the sell-off, the fund has also shown signs of style drift and its recent use of credit default swaps to hedge credit risk has been unsuccessful.”

The UK Smaller Companies sector was the third best performer during the month, with an average rise of 4.3%.

The closed-ended space also saw strong returns from UK investments, with the UK Equity Income sector topping the tables with a 7.52% increase, followed by UK All Companies and UK Equity & Bond Income.

Deal or no deal: When will the UK equity tide turn?

Ben Yearsley, director at Shore Financial Planning, said: “With many of the largest UK companies announcing a return to the dividend roster over the last month it isn’t really a surprise seeing renewed interest in the equity income sector.”

Two UK funds have also made it into the list of the ten best performing funds in March: RWC UK Value, up 9.27%, and Stonehage Fleming UK Equity Income, up 8.79%, signifying a rebound for value and income stocks.

Reversal of fortunes for Baillie Gifford

The top fund in the list was Sanlam US Dividend, a contrarian, dividend value fund run by head of US equities Adour Sarkissian, which rose 11.61%.

In total, five US funds made it into the best performers list in March, notably all of these being value-focused names, with the usual suspects such as Ballie Gifford’s growth-focused strategies absent.

Yearsley said: “It is slightly ironic, or maybe fortuitous timing that in the month Baillie Gifford’s James Anderson announced his planned retirement (for April 2022) that their funds had such a tough time.

“At the same time, the top of the performance tables was dominated by out of favour value and cyclically focused funds. An obvious reminder to have balance in portfolios and that one style doesn’t dominate in perpetuity.”

In terms of sectors, China was the worst performer, falling 4.56%, while emerging market bonds and Asia were also among the hardest hit areas of the market.